Jack and John Papuchyan H&H Book Services is 2nd generation bindery and family business under ownership of two brothers – Jack and John Papuchyan. Their knowledge comes from their godfather Antony who learned the art of bookbinding when in France. He came back to Armenia and worked at the Academy of Sciences of Armenia as a bookbinder. In that workshop they used to do new bindings, restoration and conservation of different types of materials. This is where the brothers got their primary education in bookbinding. In 1980 they opened up their own bookbindery called Hoosh, meaning memory in Armenian. In 1991 they came to US and within the same year John got hired as a bookbinder in Heritage Bookshop and Bindery. After one year Jack got hired there as well. About two years later they decided to open their own bookbindery. They started the business in Burbank, Ca. After one year they moved the business to Glendale, Ca. Now Papuchyan brothers work with hi-end book dealers, private collectors, museums and studios across the world. 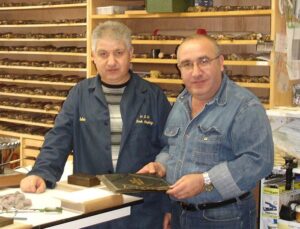